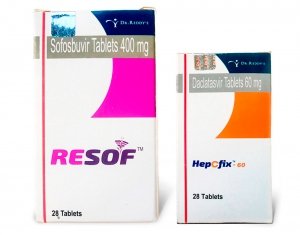 Resof (Sofosbuvir) is a state-of-the-art antiviral medicine from Dr. Reddys, a subsidiary of Indian pharmaceutical company Nontero Labs Ltd. Unlike the original drug Sovaldi, manufactured by the American company Gilead, the generic Resof from India is much cheaper, and its pharmacological properties are also effective and efficient in relation to hepatitis C for all genotypes. Resof acts directly on the hepatitis C virus, blocking its reproduction and destroying copies of the virus. To date, the drug has passed clinical trials in Europe and is approved by the European Association of Hepatologists. In European markets, the drug is presented under the name Sovaldi (from an American company), and its price is high, but there is a good alternative - buy the Indian generic Resof. Pharmacologists of Indian companies, when releasing the drug, fully adhered to the formula of sofosbuvir, and therefore millions of people got a great opportunity to get rid of hepatitis C forever. While it’s not possible to buy Resof in pharmacies, you can order it now on our company’s website. The course of treatment requires 3 or 6 packs of the drug, depending on the severity of the disease and the condition of the patients liver.

Directions Sofosbuvir Resof
At the heart of the drug, the active substance is sofosbuvir in a dose of 400 mg. The action of the drug is to suppress the replication of the virus. The drug acts directly on the virus and is used as the main component of the treatment regimen for the following genotypes - 1,2,3,4.

The antiviral drug Resof is prescribed by your doctor for the treatment of hepatitis C in combination with other drugs, such as daclatasvir, ribavirin. Adding a second antiviral drug is necessary for a quick and sustained virologic response.

Sofosbuvir for the treatment of hepatitis C is recommended to be used once a day, at the same time in the amount of one tablet. Due to its rich bitter taste, Resof must be swallowed without chewing, with plenty of water. Taking the drug is indicated with meals or after meals.

When taking the antiviral drug Resof rarely, but the following side effects may occur: headache; nausea; fatigue. If other side effects occur, it is recommended to consult with your doctor immediately.

Before you buy Resof, carefully read the contraindications for taking the drug. Resof is not recommended for use:

children and adolescents - up to 18 years old;
during pregnancy and lactation.
Elderly age - 65 years and older is not a contraindication to taking the drug.

Complex therapy with the Indian drug Resof does not involve interaction with such drugs as telaprevir and boceprevir.

The daily dose of the drug is 400 mg, it is not recommended to reduce it.

If the drug is interrupted for any reason, you must drink the pill no later than 18 hours after the last dose.

Oval tablets in bright orange at a dose of 400 mg.

Store at a temperature not exceeding 30 degrees in a dry, protected place.

Do not take after expiration date.

On our website you can buy Resof Sofosbuvir at an affordable price with home delivery.

Instructions for use Hepcfix
Composition

Daclatasvir blocks the reproduction of the viral agent. It shows high efficiency in the treatment of hepatitis C 1,2,3,4 genotypes in combination with sofosbuvir.

Hepcfix instructions, which can be found on the official website, are presented for review, the original instructions you can read in the package with the drug. The drug is prescribed by a doctor along with Sofosbuvir. Such a combination is considered the safest and most effective. Therapy is easier to tolerate and has fewer side effects.

Hepcfix (generic Daclatasvir) is recommended to drink 1 time per day at the same time. At the same time, 1 tablet of Sofosbuvir is also used. However, the dosage of the drug can be increased or decreased depending on the condition of the patient, for example, the presence of HIV, its tests and the degree of liver damage by the virus. It is determined by the attending physician, as well as the duration of therapy.

Hepcfix (India) is taken 1 tablet a day, washed down with water. It is not recommended to chew it. It is unacceptable to skip taking the medicine. If you forgot to take the medicine at a specific time, take it later. It is forbidden to drink 2 doses in a row. If after taking the drug 2 hours have not passed and vomiting has occurred, take another 1 tablet.

The duration of therapy with the drug Hepcfix (India) is from 12 weeks to 24 weeks. After completing the course, PCR tests are taken. As a rule, they show a complete cure for hepatitis C.

With cirrhosis, the duration of therapy is 24 weeks. With a diagnosis of chronic hepatitis C 1 and 4 of the genotype, treatment does not exceed 12 weeks.

Sofosbuvir and daclatasvir have a number of contraindications, it is not recommended to take it in the following cases:

allergy;
intolerance to the substances that make up the drug;
during pregnancy and lactation;
children and adolescents under 18 years old.
IMPORTANT!
The drug is not used as an independent tool for the treatment of hepatitis C. In the presence of cirrhosis, therapy is carried out under the strict supervision of a physician.

Side effects of daclatasvir

Before you buy Hepcfix (Daclatasvir 60 mg), it is recommended that you familiarize yourself with the side effects of the medicine. Among them are the following:

general weakness;
loss of appetite;
joint pain, muscle pain;
anemia;
fatigue;
stomach upset.
In some cases, anxiety appears, the mood often changes. These phenomena are observed only in a small number of patients.

Hepcfix (Daclatasvir Generic) can be stopped only after consulting a doctor. The reason for interrupting the course is not passing nausea, headaches, as well as the low effectiveness of the drug.

Interaction with other medicines

Hepcfix is ​​not compatible with drugs that release glycoprotein and cytochrome. It is not recommended to drink it with such medicines: 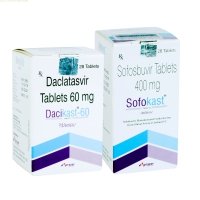 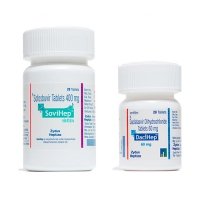 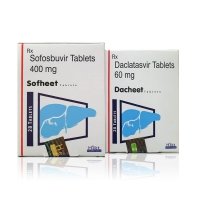 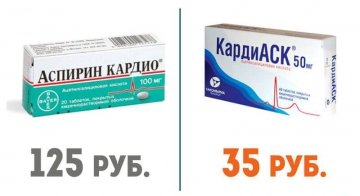