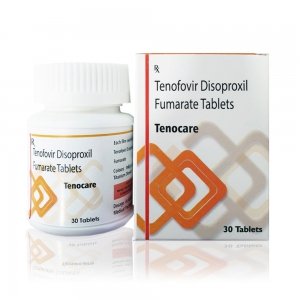 Tenocare (Tenofovir 300mg) buy at a profitable price in India

The concentration of tenofovir required for 50% inhibition (EC50 - 50% effective concentration) of the wild-type laboratory HIV-1IIIB strain is 1-6 μmol / L in the lymphoid cell line and 1.1 μmol / L against the primary HIV-1 subtype B isolates in mononuclear peripheral blood cells. Tenofovir is also active against HIV-1 subtypes A, C, D, E, F, G, and O, as well as against HIVBaL in primary monocytes / macrophages. Tenofovir also exhibits in vitro activity against HIV-2 with a 50% effective EC50 concentration of 4.9 μmol / L in MT-4 cells.

HIV-1 strains with reduced sensitivity to tenofovir and K65R substitution in the reverse transcriptase gene were isolated in vitro and in some patients. Avoid the use of tenofovir disoproxyl fumarate in patients previously treated with antiretroviral therapy, strains of which contain the K65R mutation.

In clinical studies involving patients previously treated with antiretroviral therapy, anti-HIV activity of 300 mg tenofovir disoproxyl fumarate against HIV-1 strains with resistance to nucleoside inhibitors was evaluated. The results showed that patients with HIV expressed 3 or more mutations associated with thymidine analogs, including substitutions of M41L or L210W in reverse transcriptase, showed a reduced response to therapy with 300 mg of tenofovir disoproxil fumarate.

After iv administration of Css, the distribution of tenofovir was estimated at approximately 800 ml / kg. After tenofovir disoproxil fumarate is taken, tenofovir is distributed into many tissues, with the highest concentrations being observed in the kidneys, liver, and intestinal epithelium in different areas (preclinical studies). In vitro binding of tenofovir to plasma proteins or blood serum was less than 0.7 and 7.2%, respectively, in the range of tenofovir concentrations from 0.01 to 25 μg / ml.

The pharmacokinetics of tenofovir did not depend on the dose of tenofovir disoproxyl fumarate in the range from 75 to 600 mg and did not change upon repeated administration at any dose level.

In vitro studies have shown that neither tenofovir disoproxil fumarate nor tenofovir are substrates of CYP450 enzymes. Moreover, at concentrations significantly higher (about 300 times) that observed in vivo, tenofovir did not inhibit in vitro drug metabolism mediated by any of the major isoforms of human CYP450 involved in biotransformation (CYP3A4, CYP2D6, CYP2C9, CYP2E1 or CYP1A1 / 2). Tenofovir disoproxyl fumarate at a concentration of 100 μmol / L did not affect any of the CYP450 isoforms, with the exception of CYP1A1 / 2, where a slight (6%) but statistically significant decrease in the metabolism of the CYP1A1 / 2 substrate was observed. Based on this information, it can be concluded that there is a low probability of a clinically significant interaction between tenofovir disoproxil fumarate and drugs whose metabolism is mediated by CYP450.

Tenofovir is excreted mainly by the kidneys, both by filtration and by the active tubular transport system, and after iv administration, approximately 70-80% of the dose is excreted unchanged in the urine. The total clearance was estimated at approximately 230 ml / h / kg (approximately 300 ml / min). Renal clearance was estimated at approximately 160 ml / h / kg (about 210 ml / min), which exceeds the glomerular filtration rate. This suggests that tubular secretion is an important part of tenofovir excretion. After oral administration, the terminal T1 / 2 of tenofovir is from 12 to 18 hours.

Studies have shown that an active tubular secretion transport system involves the uptake of tenofovir by the proximal tubule cells through organic human anion transporters (hOATs) 1 and 3, and its excretion into the urine using a marker marker protein of multidrug resistance 4 (MRP4).

Limited data on the pharmacokinetics of tenofovir in women indicate the absence of a significant sexual effect.

In patients with end-stage renal failure (CC <10 ml / min) who needed hemodialysis, the tenofovir concentrations between dialyses increased significantly for 48 h, reaching an average Cmax of 1032 ng / ml and an average AUC0-48h of 42,857 ng × h / ml

It is recommended that the interval between doses of 300 mg of tenofovir disoproxil fumarate be changed in adult patients with CC <50 ml / min or in patients already having end-stage renal failure and in need of dialysis.

It was found that in non-fissile mononuclear cells of human peripheral blood (MCPC) T1 / 2 of tenofovir diphosphate is about 50 hours, while in MCPC stimulated by phytohemagglutinin it is about 10 hours.

The drug is taken orally during meals. The tablet must be swallowed whole with water. Tablets should not be chewed or broken.

Treatment should be initiated and monitored by a physician with experience in treating HIV infection and / or chronic hepatitis B.

The choice of drug for the treatment of HIV-1-infected patients who have previously received treatment should be based on checking for individual viral resistance and / or patient treatment history.

The recommended dose of the drug for the treatment of HIV and chronic hepatitis B is 1 tab. (300 mg) 1 time / day.

treatment of HBeAg-positive patients without cirrhosis should continue for at least 6-12 months after confirmation of HBe seroconversion (disappearance of HBeAg and HBV DNA with the appearance of anti-HBe) or until HBs seroconversion, or until loss of effectiveness. After discontinuation of treatment, it is necessary to regularly check the serum ALT and DNA levels of hepatitis B virus in order to identify possible late relapses of viremia;
treatment of patients with HBeAg-negative hepatitis B without cirrhosis should continue, at least until HBs seroconversion or signs of treatment failure. In the case of prolonged treatment lasting more than 2 years, it is recommended to regularly review the treatment again to confirm that it is acceptable for the patient to continue the chosen therapy.

HIV-1: at the age of 12 to 18 years and with a body weight of ≥35 kg, the recommended dose of the drug is 1 tab. (300 mg) 1 time / day. In exceptional cases, the tablet of the drug can be taken immediately after it is dissolved in approximately 100 ml of water, orange or grape juice.

If the dose has been skipped and less than 12 hours have passed from the usual time of taking the dose, the patient should take the drug with food as soon as possible and return to the usual regimen of the drug. If after skipping a dose more than 12 hours have passed and the time for taking the next dose of the drug is approaching, the patient should not take the missed dose, but take the next dose in accordance with the usual regimen of the drug.

To date, there is no data on the basis of which it is possible to give recommendations regarding dosing for patients over the age of 65 years.

Tenofovir is excreted in the urine, therefore, patients with impaired renal function have a longer T1 / 2 of tenofovir from the body. 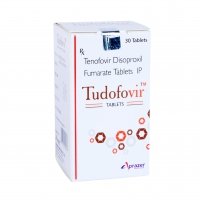