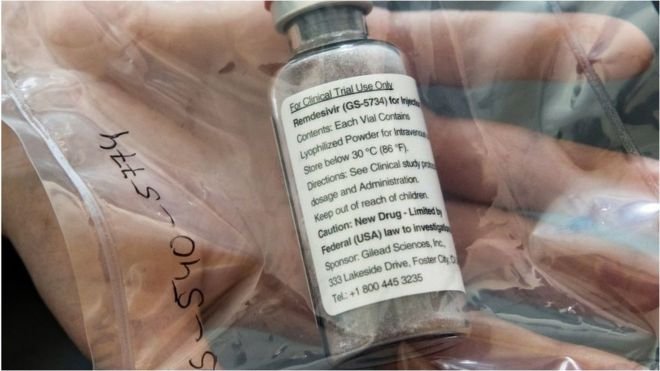 A US pharmaceutical firm has signed agreements with drug makers in South Asia to expand supply of the drug remdesivir for treating Covid-19.

The agreement between Gilead and five generic pharmaceutical companies in India and Pakistan will help make the medicine for 127 countries.

Remdesivir cut the duration of symptoms from 15 days to 11 in clinical trials at hospitals around the world.

The antiviral drug was originally developed as an Ebola treatment.

It works by attacking an enzyme that a virus needs in order to replicate inside our cells.

Under the licensing agreement, the five companies have the "right to receive a technology transfer of the Gilead manufacturing process for remdesivir to enable them to scale up their production quickly", a statement from Gilead said.

The licences would be royalty-free until the World Health Organization (WHO) declares the end of the public health emergency arising out of Covid-19, or until another pharmaceutical product or a vaccine is approved to treat or prevent the disease, the statement said.

The managing director of the privately-owned Hyderabad-based Hetero Labs told the BBC that it is "too early" to determine the pricing of the drug and when the manufacture will begin.

"Things will be clearer by June. We anticipate controlled usage [of the drug] through government institutions. Our main aim is that India should be self-sufficient in the drug if India chooses to use it," Vamsi Krishna Bandi said.

The $1bn firm is one of the world's largest producers of anti-retroviral drugs, supplying to nearly five million patients of HIV-Aids. Hetero Labs makes some 300 products at 36 manufacturing facilities worldwide.

Indian medical science and drug control authorities will have to first decide how they want to use the drug on patients.

A senior scientist at the Indian Council of Medical Research (ICMR) has said that it will consider using the drug if Indian firms are able to make it.

"Initial data based on an observational study shows that the drug is effective. We will wait for the results from the WHO solidarity trial and also see if some other companies can work on this to proceed further," Raman Gangakhedkar said.

The clinical trial of remdesivir was run by the US National Institute of Allergy and Infectious Diseases (NIAID) in which 1,063 people took part. Some patients were given the drug while others received a placebo.

D Anthony Fauci who runs the NIAID said: "The data shows remdesivir has a clear-cut, significant, positive effect in diminishing the time to recovery."

He said the results proved "a drug can block this virus" and were "opening the door to the fact that we now have the capability of treating" patients.

The impact on deaths, though, is not as clear-cut. The mortality rate was 8% in people given remdesivir and 11.6% in those given a placebo, but this result was not statistically significant, meaning scientists cannot tell if the difference is real.

The BBC's health and science correspondent James Gallagher says it is also not clear who is benefiting from the drug and poses a few questions.

Is it allowing people who would have recovered anyway to do so more quickly? Or is it preventing people from needing treatment in intensive care? Did the drug work better in younger or older people? Or those with or without other diseases? Do patients have to be treated early when the virus is thought to peak in the body?

These will be important factors when the full details are eventually published, our correspondent says.